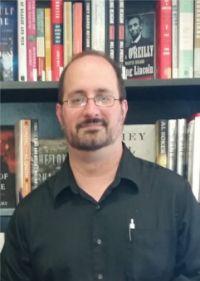 Born in the heart of West Virginia, Royce dreamed of becoming a writer throughout his younger years and was always an avid reader. Starting out with an old, and often temperamental typewriter, he wrote poems and stories that helped to develop his young imagination. A kind-hearted teacher in Junior High School took his first "manuscript" home for the summer and painstakingly read through pages and pages of violent, poorly written L. Sprague de Camp-esque combat scenes. She returned it the following school year with the classic red marks, suggestions, and encouragement that fueled his desire to write. (I still edit with a red pen, just to experience the nostalgia of that first "manuscript") A word processor, a gift from his grandparents, became the source of many tall tales which unfortunately never left the realm of the 3.5 inch floppy disks. Those tales, and the disks they were stored upon, faded into the digital oblivion of lost ideas.

He later joined the Navy, serving on the USS Belknap (CG-26), the USS Mississippi (CGN-40) and at Naval Medical Center Portsmouth, in Portsmouth, Virginia. After a brief career in sales, he went back to school at Marshall University, and is now a Registered Nurse in Charleston, WV at one of the largest hospital systems in the region. He attended and graduated from Saint Mary's School of Nursing and Marshall University.

Royce lives near Charleston, WV with his wife Carolyn, and their menagerie of fur babies.
Tweet