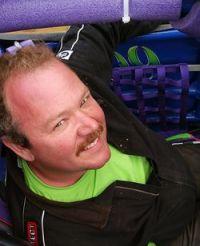 Steve Woods was born in Oregon in 1968. His family moved eleven times in his first fifteen years. Over the next twenty-two years, he became a father several times and experienced two failed relationships. He continued moving every few years, trying to find a place to call home. In 2007, he struck up a conversation with a woman named Michelle on the Internet. Even though they lived more than one hundred miles apart, their friendship grew. They finally met for the first time the following year, but Cupid failed to show. However, they continued their friendship. Circumstances led them to later become best friends. One day, Steve realized he had fallen in love with Michelle. They got married, and their love continues to grow by leaps and bounds. In 2013, Michelle decided to fulfill a dream for Steve and had a race car built for him. They hit the track the following year. In February 2015, Steve had the most vivid dream of his life. With Michelle’s encouragement, he went to work on his first book, Evolved. Watching her husband follow his dream gave Michelle a courage she had never known, and in May 2015, she too got behind the wheel of a race car. Each day they wake up grateful for a new day together and anxious to see where each new adventure will take them.