Books All Other Genres Superiority Complex 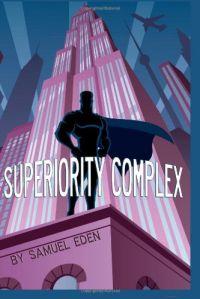 Author
Samuel Eden
It's like reading a year's worth of comics!

Jason Chalmers is a recent graduate from the Academy, and is thrust into the role of superhero on the world's premier superteam the Defenders. Thomas Reid is the newest student at the recently formed vilainy academy, will he graduate into godhood or be vaporized by his classmates? Mike has just moved to Superior City to go to college, but can he stay out of trouble in a city with more superbeings per capita than any other in the world, especially since he's a superbeing himself? And don't forget DaVinci, is he a budding supervillain or just looking for a place to belong? Can they survive the complexity?

You can learn more about Samuel Eden and his work at samueleden.com
Tweet

Those that enjoy super hero stories and fantasy or SciFi should enjoy this book
May 16, 2016
Rating
4.0
I just finished reading Superiority Complex by Samuel Eden and here is my review of the book. This superhero novel focuses on four characters; two heroes and two villains. The first story is about Jason Chalmers, a hero that suddenly finds himself on the premier superhero team, The Defenders, right out of superhero school because of his unique powers including precognition and chronal energy discharge.

Jason goes by the superhero name Slipstream and finds himself learning on the job as he faces off against a horde of zombies. I found the section about Slipstream to be one of the more interesting stories as he dealt with the difficult decisions facing a superhero. Making the wrong decision can have deadly consequences but in a city full of super villains sometimes you can't save everyone. There was a part about zombies who overrun a hospital that makes you realize that even a hero with precognition can get it wrong.

Next up came Thomas Reid, AKA Torment, who decides he want to use his powers to transmute almost any element to anything else for something huge. So he decides to join a super villain school, find some teammates and make a name for himself. What would you guess happens when you get a bunch of power hunger super villains into a school and train them to be even more powerful? You guessed it! Not all of them graduate and many don't even remain among the living. Will Tom make it out alive?

And not all people with powers become super villains or super heroes. Some deliver pizzas! Mike decides to use his teleportation ability to deliver pizzas while going to college at Superior University. He is delivering pizza to an office building when a super villain comes in and starts shooting everyone. This makes Mike question his inaction and he begins to question what he should be doing with his super power. What will he do next time when face to face with another super villain?

Finally there is DaVinci, the super genius villain. He was one of the faculty when Tom was in super villain school. At first DaVinci was the backward genius that didn't know how to understand human interactions. Tom explains to him that if DaVinci could understand human behavior he could become a much more powerful villain. DaVinci, being the smart guy that he is studies everything he can about psychology and creates his own super villain group. With his nanites, wealth earned from manipulating the financial markets, and his self-picked team DaVinci becomes a super villain to be respected. Will his new found understanding of human desires and greed be enough?

I found Superiority Complex to be an interesting read and enjoyed reading it quickly during vacation. The characters are interesting and well developed. The situations they are put into create interesting physical and mental challenges. One thing the author needs to work on more is proper grammar. I found myself focusing on the spelling mistakes and improper grammar too often to completely enjoy the book. Simple spelling mistakes such as missing letters could easily have been eliminated with any editing. Those that enjoy super hero stories and fantasy or SciFi should enjoy this book. I rate it four out of five stars for the good characters and interesting situations but could have enjoyed it more if it had been properly edited.

F
Fwwadmin #1 Reviewer 122 reviews
Report this review Comments (0) | Was this review helpful to you? 0 0