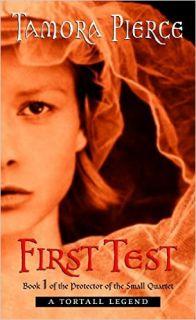 Ten years after knighthood training was opened to both males and females, no girl has been brave enough to try. But knighthood is Keladry's one true desire, and so she steps forward to put herself to the test.

Up against the traditional hazing of pages and a grueling schedule, Kel faces one roadblock that seems insurmountable: Lord Wyldon, the training master of pages and squires. He is absolutely against girls becoming knights. So while he is forced to train her, Wyldon puts her on a probationary trial period that no male page has ever had to endure. Further set apart from her fellow trainees, Kel's path to knighthood is now that much harder. But she is determined to try, and she's making friends in the most unlikely places. One thing is for sure, Kel is not a girl to underestimate.
Tweet

Great series about a young girl that trains to be a knight
May 16, 2016
Rating
5.0
It has been some time since I read this series but I will simply say Protector of the Small is a great series.

You get to read about the trials that a young person (a young girl in this story) goes through to become a knight.  The training is grueling both physically and mentally but young Kel is up to the challenge.

If you enjoy stories of young people growing up and showing bravery and heart before they become great like I do than read this book.  I think it is one of the best fantasy/historical fiction series that you will find.  I give it five out of five stars of course.
F
Fwwadmin #1 Reviewer 122 reviews
Report this review Comments (0) | Was this review helpful to you? 0 0