Books Fantasy The Way of Kings

The Way of Kings 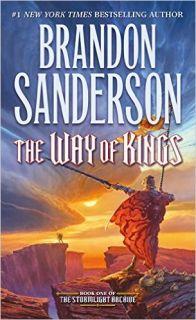 Genre
Fantasy
Subgenres
Epic
Author
Brandon Sanderson
Series
The Stormlight Archive
Book # in Series
1
Speak again the ancient oaths,
Life before death.
Strength before weakness.
Journey before Destination.
and return to men the Shards they once bore.
The Knights Radiant must stand again.

Roshar is a world of stone swept by tempests that shape ecology and civilization. Animals and plants retract; cities are built in shelter. In centuries since ten orders of Knights fell, their Shardblade swords and Shardplate armor still transform men into near-invincible warriors. Wars are fought for them, and won by them.

In one such war on ruined Shattered Plains, slave Kaladin struggles to save his men and fathom leaders who deem them expendable, in senseless wars where ten armies fight separately against one foe.

Brightlord Dalinar Kholin commands one of those other armies. Fascinated by ancient text The Way of Kings, troubled by visions of ancient times, he doubts his sanity.

Across the ocean, Shallan trains under eminent scholar and notorious heretic, Dalinar’s niece Jasnah. Though Shallan genuinely loves learning, she plans a daring theft. Her research hints at secrets of the Knights Radiant and the true cause of the war. (less)

Massive fantasy epic begins here and is worth the read
July 02, 2016
Rating
5.0
I just finished the 1,001 page or 45 hours of the epic fantasy novel The War of Kings by Brandon Sanderson and I can tell you it was worth the time. The life of a bridgeman is usually short as they run unshielded directly into a storm of enemy arrows but Kaladin is about to change all of that.

Kaladin is the best character in the book which focused on the stories of four major characters. Kaladin was the son of a surgeon who ends up a slave and then a bridgeman. You quickly discover that Kaladin is very special and he plans to improve the lives of the bridgemen or die trying. The other three characters include a high prince, a young woman, and an assassin. The other three characters have some exciting moments especially at the end of the book but Kaladin really is the star of the book.

The life and often death of a bridgeman are really well written. The bridgemen begin as miserable men that don't even know each other's names since they all expect to die in the next bridge run. They have no shields and carry a large, heavy bridge directly against enemies releasing a hail of arrows at them.

The world is well defined with magical creatures that relate to either natural conditions such as rain and wind or emotions such as pain or glory. There are also powerful storms that feel like a character of their own. You also learn about the constant battles the high princes wage against a humanoid race blamed for killing their king.

I don't usually like books over 500 pages long but even at 1,000 pages I found myself wanting to continue to listen to this audiobook as the story is so well written and the characters are people that I cared about. I give this book five out of five stars and recommend it to all fans of epic fantasy.
F
Fwwadmin #1 Reviewer 122 reviews
Report this review Comments (0) | Was this review helpful to you? 0 0