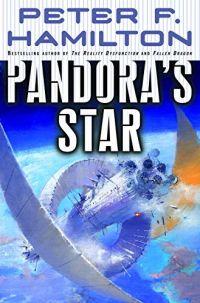 The year is 2380. The Intersolar Commonwealth, a sphere of stars some four hundred light-years in diameter, contains more than six hundred worlds, interconnected by a web of transport “tunnels” known as wormholes. At the farthest edge of the Commonwealth, astronomer Dudley Bose observes the impossible: Over one thousand light-years away, a star . . . vanishes. It does not go supernova. It does not collapse into a black hole. It simply disappears. Since the location is too distant to reach by wormhole, a faster-than-light starship, the Second Chance, is dispatched to learn what has occurred and whether it represents a threat. In command is Wilson Kime, a five-time rejuvenated ex-NASA pilot whose glory days are centuries behind him.

Opposed to the mission are the Guardians of Selfhood, a cult that believes the human race is being manipulated by an alien entity they call the Starflyer. Bradley Johansson, leader of the Guardians, warns of sabotage, fearing the Starflyer means to use the starship’s mission for its own ends.

Pursued by a Commonwealth special agent convinced the Guardians are crazy but dangerous, Johansson flees. But the danger is not averted. Aboard the Second Chance, Kime wonders if his crew has been infiltrated. Soon enough, he will have other worries. A thousand light-years away, something truly incredible is waiting: a deadly discovery whose unleashing will threaten to destroy the Commonwealth . . . and humanity itself.

Could it be that Johansson was right?

Too long and anti-climatic ending
January 08, 2018
Rating
2.0
Nothing seems to delay my book reviews more than the holidays. Well, maybe one thing delays them more and that is extremely long books.  Pandora's Star at 992 pages or over 37 hours is massive and truth too be told way longer than it needed to be.
There are some excellent parts of this SciFi novel including the first contact with an alien race in their home world and the aliens subsequent response.  However, the author takes the plot on too many tangents that never conclude in a satisfactory way.
I know this is the first book in a series but after investing so much time in completing it I expected something that brought the various pieces together or at least explained why certain minor plot lines were included at all.
With better focus and pacing this could have been an excellent book.  It really left me disappointed with the conclusion so I give it two of five stars.  Less really can be more and detailed descriptions of non-important characters and situations actually distract from the potential story.